Certified self-contained vans can park overnight in any council parking area that is not sign-posted as prohibited.
For complete details check wdc.govt.nz/camping. Check for onsite signs on arrival.
You risk a $200 fine for ignoring the rules.

Whangarei District Council also provides four designated freedom camping areas for self-contained vehicles
as well as 18 sites that permit non self-contained camping options.
Parking spaces and van length are limited at these sites and they are very popular, so be sure to arrive early
if you want to park overnight. We recommend you avoid these during the summer season.

We decided to try a mid-winter trip to Northland to try out our motorhome in colder conditions. Our first stop was going to be the Onerahi public car park to see how we got on using just battery power in winter. Onerahi is a suburb of Whangarei,  and just a short drive from the city centre. From there we planned to explore the Whangarei Heads before heading up to Paihia and then Whangaroa.

We arrived at around 5pm, just as the light was beginning to fade. There was plenty of parking, with only a few locals using power boats on the harbour, or out walking the dog.

The first thing we noticed was the amazing quality of the light over the harbour - the sky turning pink and reflected in the blue of the water. The last rays of the sun lit up Limestone Island immediately opposite in a way to looked surreal. In the clear winter air it created a beautiful effect. I have to admit, I went crazy with the camera, and I've posted more here than I would normally do.

The Masden Point oil refinery could be seen in the distance across the harbour and people were taking advantage of their beautiful environment, water skiing, kayakking, or just going for a walk.

The location was quiet, with only the occassional car driving past. We made ourselves some bbq'd dinner and settled in for the night.

The next morning we decided to get up to catch the sunrise, figuring that it was also likely to be a good one.  Again, we were not disappointed. Not spectacular so some we have seen, but the quality of the light, and reflections of the water were just stunning. I might add that it was also quite cold.

We had a look around and noted that the toilets were in good condition and well maintained. The children's playground would be great for any motor caravanners travelling with young children.

I chatted to a young man who was watching the water-skiers, and he told me that the fishing in the harbour was quite good, but a lot of the schapper he caught were undersize, and had to be put back. further out in the harbour there is a marine reserve where no fishing is allowed at all.

Along with the water-skiing, we also saw fishing boats going out, an enthusiastic kayaker, and a barge transporting people to Limiestone Island, which was just a short boat ride into the harbour.

As a quiet, safe location, not far from the Whangarei city, this would have to rate as a really great place to stop for the night.

We also discovered that we were not getting the battery life that we were hoping for - mind you we were running the TV over dinner and then 2 computers late into the evening. It might be time to look at some extra solar panels...

Update: 20-Nov-2017
The Whangarei District Council only allows freedom camping in the designate area detailed on the Overnight Camping sign. This is on the grass area on the other side of the road. 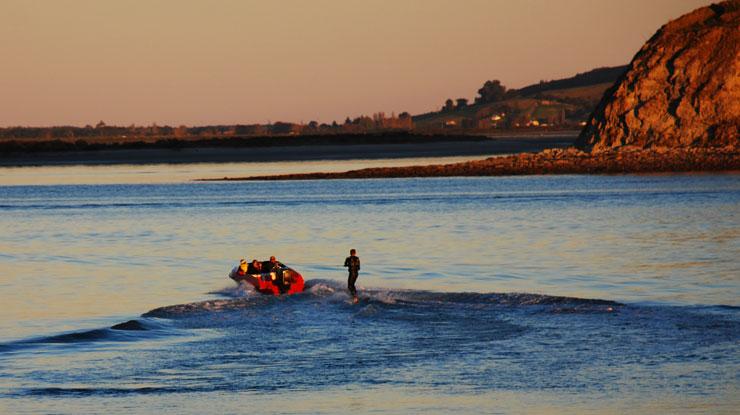 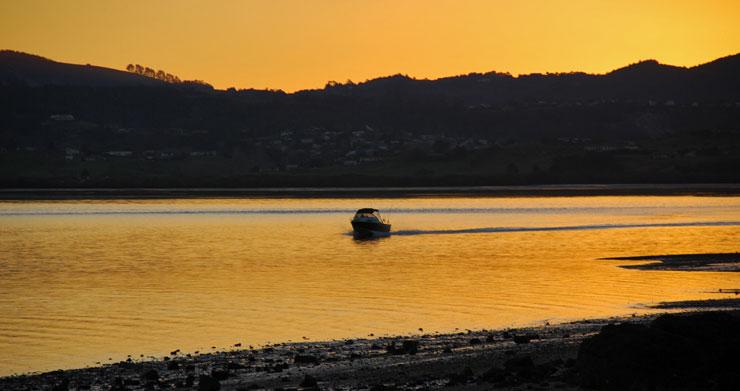 Going fishing at sunrise the next morning

POST A COMMENT:
Register  |  Login
11:59 AM 13-May-17 by Denise from Whiritoa Public
Really lovely place to park for a night or two. We stayed one night in May with three other campers. Whilst here we cycled on the reasonably new cycling path, [just down the road a little towards Raurimu Ave], all the way from Onerahi to the Town Basin in Whangarei itself. Most of it is a wide concrete path, with the part through the mangroves a gravel surface. An easy cycle along a picturesque route... with a load of cafes at the end!