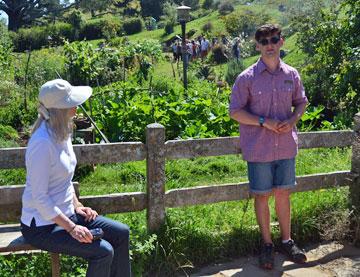 Starting the guided tour in front of the vege garden 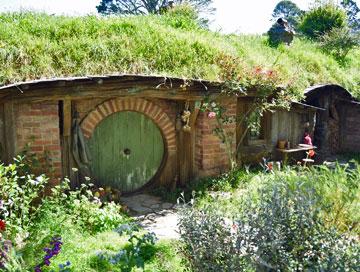 The first of many Hobbit Holes 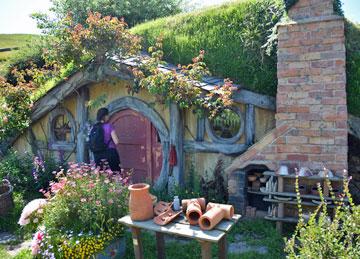 The Hobbit Hole for the local potter 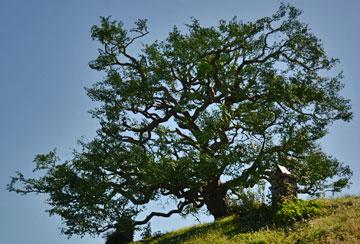 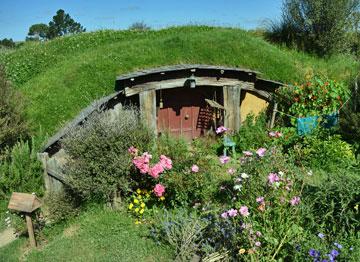 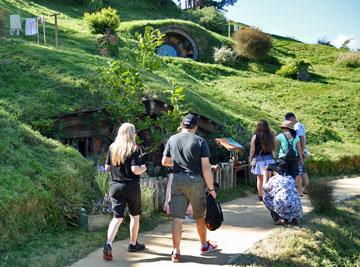 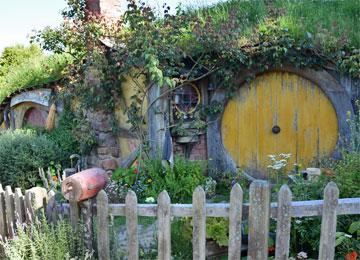 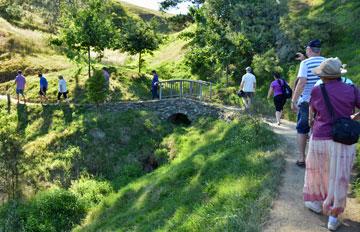 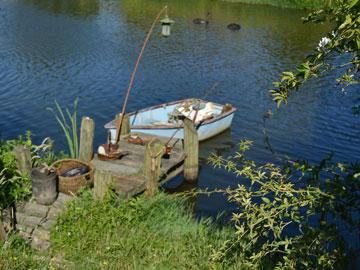 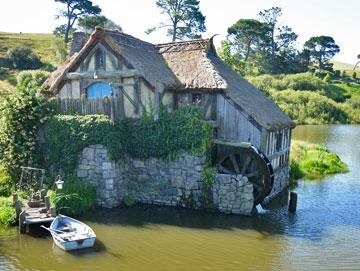 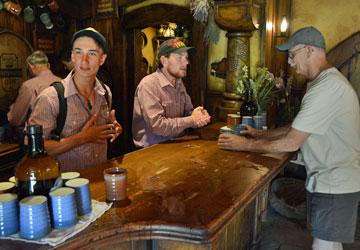 The bar inside the Green Dragon

The Hobbiton Movie Set used in the Lord of the Rings and the Hobbit movies attracts visitors from around the world. Guided tours take you through the entire set, finishing up at the Green Dragon pub.

We decided to call in to have a quick look on a sunny mid-week afternoon in January. We'd watched the Lord of the Rings trilogy, and were curious to see what all the fuss was about.

The carpark was full to overflowing when we arrived, with people queuing up to buy tickes. The cafe and gift shop were both full, and the tour buses fillling up and disappearing at regular intervals. We'd seen this kind of activity in the United States, but not hear in New Zealand. Totally amazing.

So, we decided to join the queue and buy some tickets. They weren't cheap either - $75 each, and the next available tour was an hour and a half away. So we bit the bulllet and bought the tickets, and then headed back to our motorhome to make our own coffee while we waited.

When the time came, we joined the queue for our coach, and headed off to the film set. The driver provided a very interesting commentary about the background to the movies, and how Peter Jackson found the right location, the secrecy involved, and how the cover was blown when some locals recognised the distant Kaimai ranges in an early film trailer.

Disgorged from our coach, we were joined by our tour guide who escorted us around the twelve acre site. It was fascinating to walk past all the hobbit holes, each with it's own character depending on what they did.

Peter Jackson's attention to detail was unbelievable. Everything had to be just right, even if that meant stripping all the pears of a pear tree, and replacing them with smaller (hobbit sized) pears.

The old oak tree had be sourced from another location, cut down and reset at the top of the hill, and every artifical leaf attached one at a time by hand.

The tour finished at the Green Dragon Inn, where a choice of hot or cold beverage was included in the ticket cost.

It was very well done. The set location was stunning. The attention to detail was continued in the maintenance of the site, with smoke rising through chimneys, washing hanging lines, and a well tended vegetable garden.

It was worth the $75 each and the long wait.

Another tip for motor caravanners is to avoid the really busy days - we visited on a sunny afternoon in the middle of the summer holiday season. The carpark was so full, additional parking had been opened up in the paddock out the back, and even that was filling up. It was on grass, quite steep, and not particulary easy to navigate, especially in our front wheel dirve van.

Note that you can no longer stay overnight in self-contained vans. 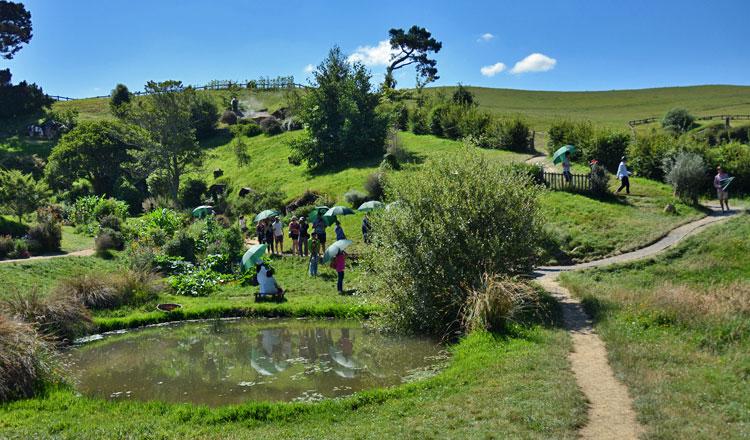 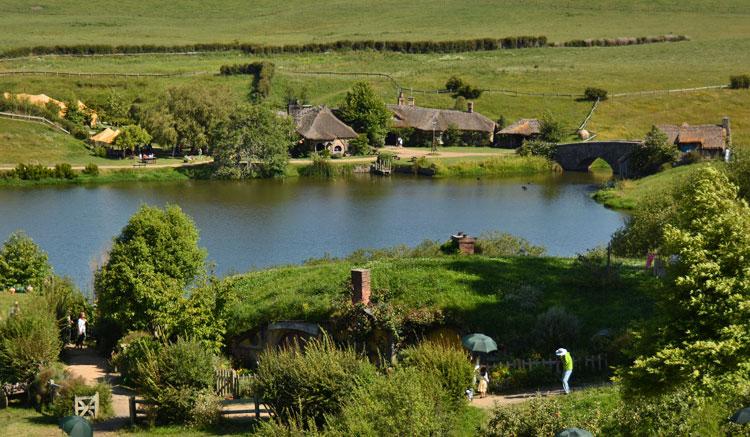 The Green Dragon Inn across the lake 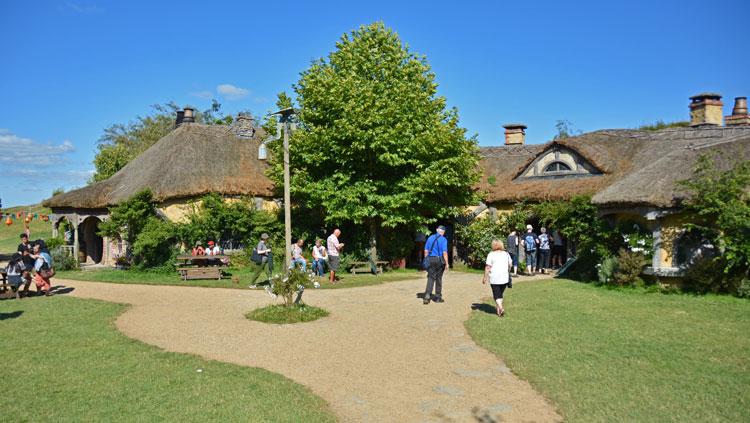 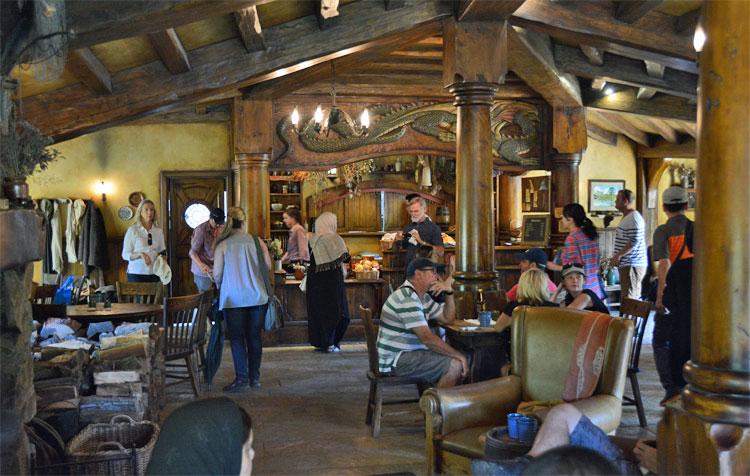 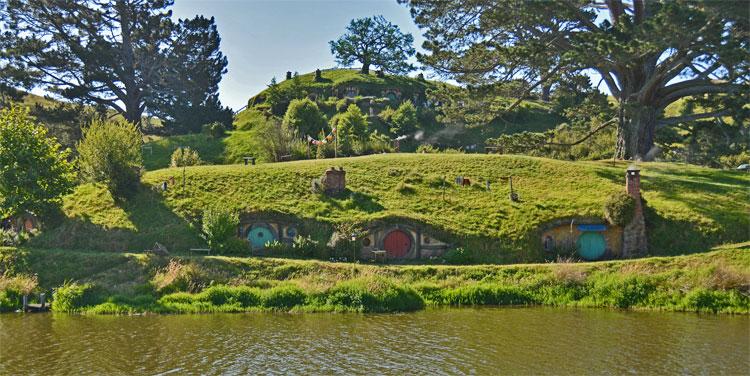