Matauri Bay is stunning! The camp facilities aren't flash. But you have all year parking on grass in a location to die for.

We went there in mid-winter, driving up from some business meetings in Kerikeri, arriving mid-afternoon on a glorious clear day. We were immediately impressed with the number of large motorhomes already set up, and later were told that most of them had come up for the winter season, some of them staying for 5 to 6 months.

Walking around the campsite, I stopped to watch some of the long term campers carving up a giant fish which they had just caught. Otherwise the camp was pretty quiet, most of the residents were just relaxing outside their vans, or chatting amonst themselves. The long term visitors clearly got on well with each other, but were not so forthcoming with the termporary arrivals who might only be staying for one or two days.

We got ourselves set up and barbequed a quick dinner. The late afternoon light started to change colour as the sun set over the hills. In the cold winter air, the resulting transitions from pink to purple over the bay was just beautiful. The rest of the evening was spent trying to capture some of that on camera. How many sunset pictures do you need? I've posted just two of them in the slide show.

The next morning we got up early to see if the sunrise would be as good as the previous evening's susnset. Unfortunately, it was rising behine the large hill to the left of the camp, but I was still pretty happy with the pictures I was able to take.

However, Shuping had overheard someone talking about a walking track to the other side of the hill, so we set off to see if we could find it. What we found instead was a track that went to the top of the hill - quite steep, but well maintained. What we didn't realize, until we finally arrived at the top, was that this was the memorial to the Rainbow Warrior, which was sunk in Auckland harbour in 1985 by Frence secret agents, resulting in the death of Greenpeace photographer, Fernando Pereira.

What a stunning location! We arrived about 20 minutes before sunrise, and the sky was lit up, bathed in purple, orange and yellow. You can't guarantee a beautiful sunrise every day, but this would be worth coming to Matauri Bay for all by itself. We were up there by ourselves, and we waited until the sun had cleared the horizon before we made our way back down the track. What a great start to the day.

We made ourselves some breakfast and went off to the ablution block for a shower. The showers and toilets are basic, but work well. You need a camp security card to get in, which must be returned when you leave. The showers aren't metered and have good pressure.

True to form, with New Zealand's variable weather, it clouded over during the afternoon, and we decided to stay on for an extra day and postpone going up the Karikari peninsula until our next trip north. I had plenty to do, and sometimes it's just nice to settle in for a few days. 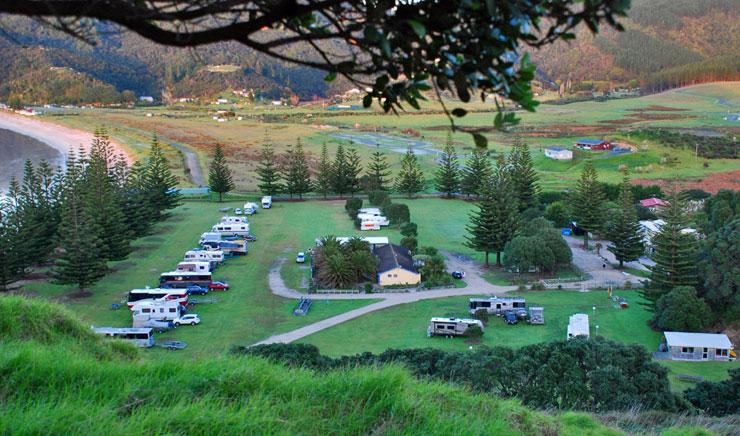